The building that we refer to today as The Regas Building has remained a steady presence in downtown Knoxville for well over a century. Originally much larger at five stories tall, the building has seen Gay Street transform from a railway to a roadway, traffic directing officers replaced by stoplights, and a passionate Regas family grow a small diner into a trademark restaurant. The history of our building is somewhat complicated. But the common thread remains, this building has always offered a space of unity and collaboration among all types of people and groups. At various points in time used for commercial, residential, office and medical, food and drink, the versatility and the diversity that The Regas Building has seen provides a rich history.

The Regas Building is a testament and a picture of the true heart of its owner and restorer, Knoxville Leadership Foundation as it connects communities of all types to be better together. 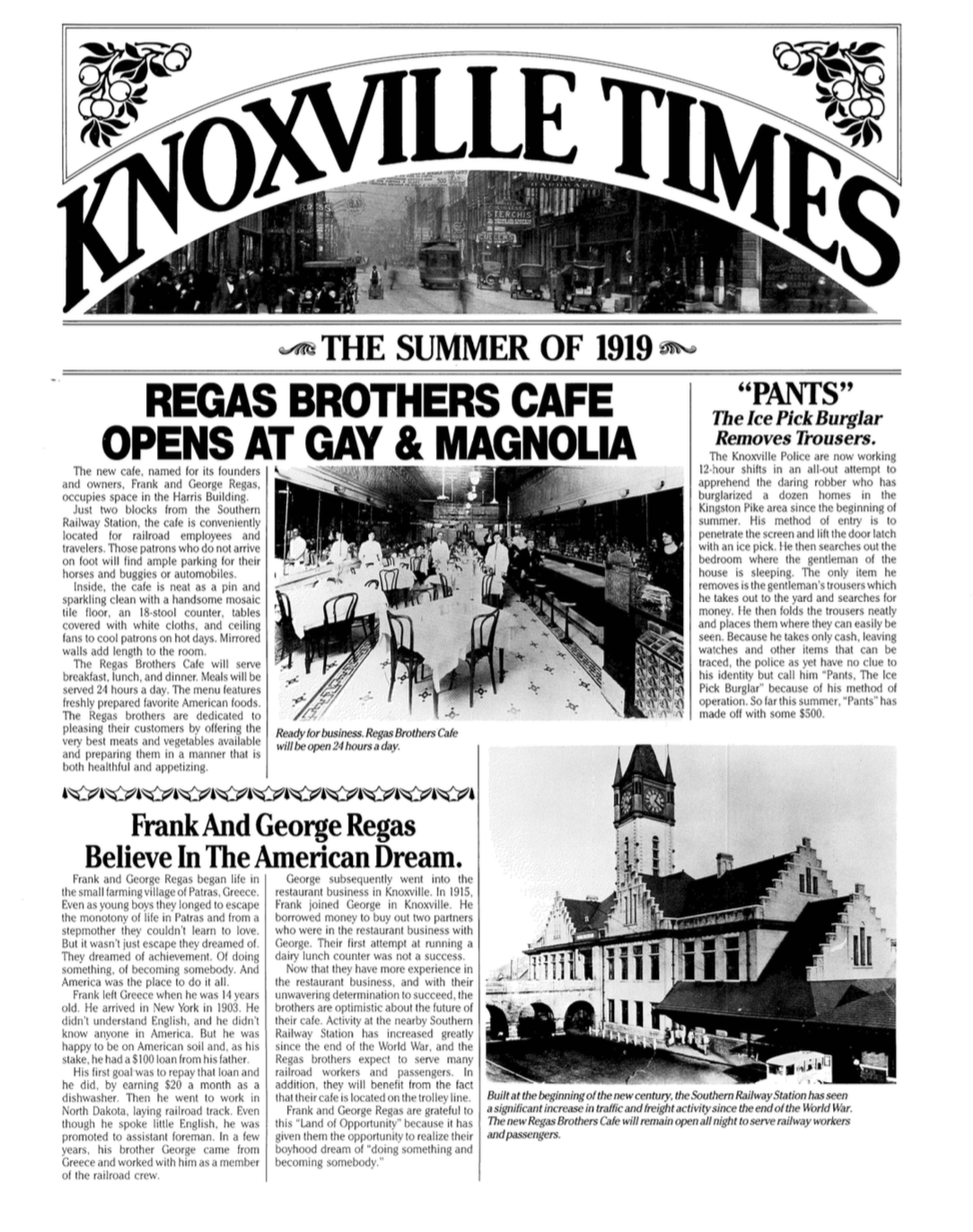 Click the photo above to read about our rich history from The Knoxville Times.

Built around 1891 in the popular Romanesque Revival style, this building was originally known as the Caswell & Harris Building, later simply the Harris Building. It was presumably named for prominent dentist and politician Madison Monroe Harris (1841-1916), a native of North Knox County who studied medicine at the University of Tennessee, who kept his dental practice on the second floor of this building for a few years in the 1890’s. The other name associated with the building in its earliest years is that of William Caswell (1846-1926), a successful banker and real-estate dealer.

By one eyewitness account, Caswell participated in the first baseball game ever played in East Tennessee, on Gay Street around 1865. Caswell was a Confederate veteran; Harris was a Union veteran. However, in this building, they were apparently partners. The Harris Building once hosted multiple businesses, including doctors’ offices, a business college, an Odd Fellows hall, and a Union veterans’ hall. Harris had an interest in this block long before the construction of the building. In the 1870’s, Harris served two terms on Knoxville’s Board of Aldermen, and was among the first to propose a long bridge across the rail yards connecting Vine Avenue and Depot Street, a project that would not actually be accomplished until 40 years later. Harris lived nearby, on Park Avenue (now Magnolia).

A proud descendant of a Revolutionary War soldier, he’s known to this day for authoring a work of genealogy. But he was best known and remembered as a generous-spirited dentist. He was “a man of remarkable energy and vitality, and spent few leisure hours,” according to one newspaper eulogy. “He was kind and considerate toward all and more especially the unfortunate.” Although Harris moved his practice to Wall Avenue near Market Square, he may have maintained an interest in the building which kept his name into the 20th century. -Jack Neely

When a five-story brick building rose on this block in the early 1890s, Knoxville was a rapidly growing city of about 30,000, with much of its energy radiating from the railroad. Nearby was the headquarters of the East Tennessee, Virginia & Georgia Railroad–soon to be a core part of a new enterprise called Southern Railway–and the busiest passenger and freight station in the region.

It was one of the busiest spots in town, and an obvious place for a hotel. There would eventually be four large hotels near the intersection of Gay and Depot, plus several small ones. However, the Watauga Hotel evolved by degrees. Probably named for the colonial-era experiment in democracy known as the Watauga Association–the heroic story enjoyed a greatly revived interest during the Tennessee state centennial celebrations of 1896-97– the Watauga Dining Room opened on the building’s second floor around 1905. The Harris Building offered several of the amenities of a hotel– a barber shop, a billiard hall, and even a post office — before 1911, when the Watauga began advertising as a hotel, for both short and long-term tenants.

The Watauga’s most famous long-term resident was eccentric attorney and law professor John R. Neal, an outspoken pundit who at the time he moved in here was strongly advocating the new Tennessee Valley Authority. Neal lived here for almost 20 years. The Watauga operated as a hotel for more than half a century, but railroad-passenger business declined after World War II. The city condemned the Watauga in 1963. Soon after, the building’s owners removed the building’s empty upper floors, including most of its hotel rooms. Today this lower part of the Watauga is the only remnant of all the downtown railroad hotels of the early 20th century. – Jack Neely

In 1919, Greek immigrants Frank and George Regas opened a place originally known as the Ocean Cafe, on Gay Street near what is now Summit Hill Drive. In 1922, they moved it into a long, narrow space on the ground floor of the Watauga Hotel building. This conference room is in the exact location of their original cafe. The Regas family’s restaurant would remain here for about 88 years. Known for several years as the Astor Cafe and by the 1930s as Regas Brothers, it was originally a simple, clean cafe with an 18-stool lunch counter, catering both to downtown regulars and to Southern Railway passengers.

Among its many staffers in the 1940s was young Dave Thomas, who much later founded the Wendy’s restaurant chain. After World War II, the Regases’ simple cafe evolved into a large and well-regarded restaurant, so popular it survived the end of the neighborhood’s original defining principle: the last passenger train left the station in 1970. What was once a lunch counter became an upscale multi-room restaurant emphasizing its premium dinner menu. A modern lounge sometimes featured live music, like internationally known jazz pianist Donald Brown. Often recommended by travel writers, Regas developed a reputation among attorneys and politicians as an informal conference center, a venue for important negotiations.

For many Knoxvillians, it was a place for special occasions–a formal date, an anniversary, or a birthday. Regas closed in 2010. – Jack Neely

Jack Neely,of the Knoxville History Project, is well known journalist, author and local historian who has been writing about Knoxville’s character and heritage for many years.

Read more here as Jack shares the Knoxville history around The Regas Building. 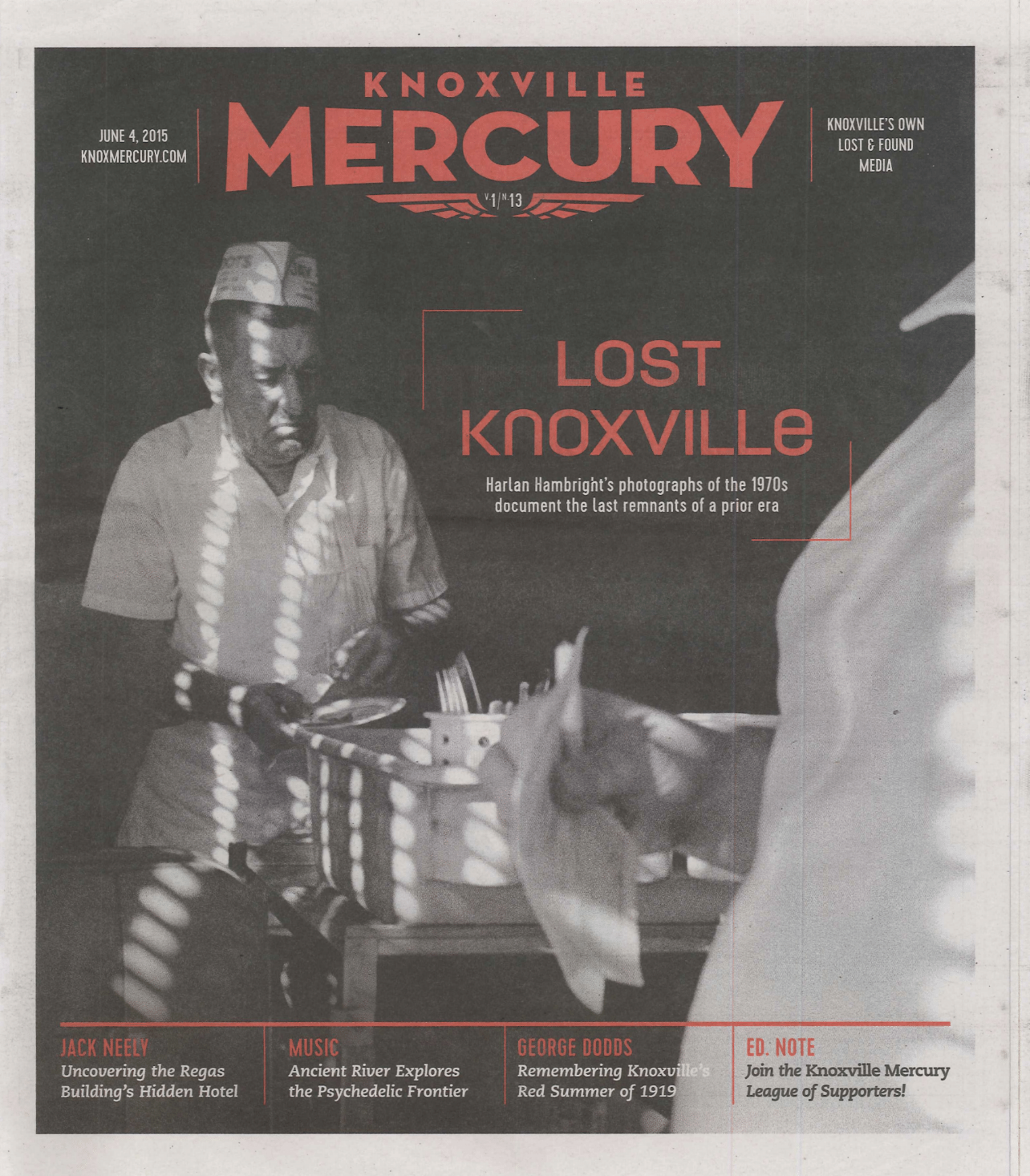